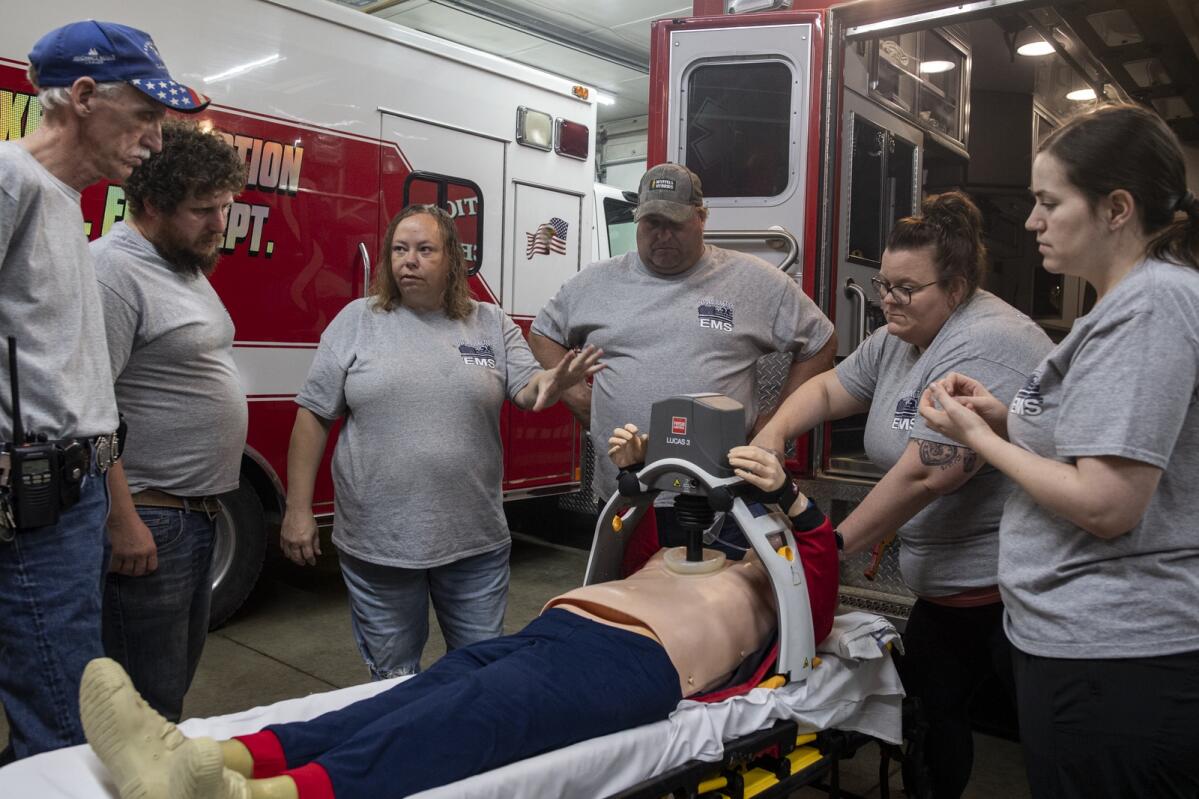 EMT Director Kim Krutzfeld (third from left) instructs volunteer paramedics and drivers on how to use lifesaving equipment during a training session at the Oxford Junction Volunteer Fire Department on October 24. (Nick Rohlman/The Gazette)

JONES COUNTY — Residents of Jones County will vote next month on whether to establish a levy that would create a stable revenue stream for emergency medical services, which are largely run by volunteers.

Voters are being asked to approve a levy of 35 cents per $1,000, which equates to a tax increase of $35 per year for the owner of a home with a taxable value of $100,000. The levy would raise about $430,000 a year for services across the county. The measure requires a qualified majority vote of 60% to be adopted. It will be at the polls on November 8.

When someone calls 9-1-1, they expect an ambulance to arrive in a timely manner, said Anamosa Area Ambulance Service Manager Sheila Frink. Increased response time can increase mortality rates. The fee would help ensure that this service remains responsive.

There are nine emergency medical services in Jones County, all but two of which are run by volunteers. One such volunteer is Kim Krutzfeld, director of the Oxford Junction Emergency Medical Service.

The Anamosa Area Ambulance Service — which is a paid service — has an annual deficit of about $400,000 a year, Frink said. The service is supported by Jones Regional Medical Center in Anamosa.

Added to that is the cost of medical supplies, which has risen dramatically in recent years, Frink said. The cost of purchasing an ambulance has gone from $173,000 to $230,000. A box of latex gloves went from $5 to $24.

Krutzfeld, who works at Edward Jones, a financial services company in Cedar Rapids, rotates with a few other volunteers in Oxford Junction to be on call from 6 p.m. to 6 a.m. and on weekends. Another emergency medical technician volunteers to be on call during the day from 6 a.m. to 6 p.m.

Volunteers must pay their own way to becoming medical technicians or paramedics, including continuing education courses every two years, Frink said. A tax that creates a steady stream of revenue can keep more ambulances on the road and help train new volunteers.

Although Oxford Junction EMS only receives around 100 service calls a year, it can mean the difference between life and death for their patients. Without these services, response time could increase for people in need of immediate medical attention, Frink said.

The Oxford Junction Emergency Medical Service charges insurance, but reimbursement for a $750 call, for example, may only be $250, Krutzfeld said. They rely heavily on donations to keep the service running.

The other paid service – Monticello Ambulance Service – covers a 160 square mile area of ​​Jones, Linn and Delaware counties, and is funded by taxes from the town of Monticello. Six full-time employees and 16 volunteers respond to approximately 700 service calls per year.

The annual operating budget for the Monticello Ambulance Service is approximately $650,000, which includes salaries, supplies and vehicle maintenance, and medical equipment. They generate less than half of that — about $300,000 a year — in billings, said Britt Smith, Monticello Police Chief and Ambulance Director.

The remaining portion is paid for by the taxpayers of the town of Monticello, Smith said.

While the tax won’t solve the problem of lost EMS revenue, it will alleviate it, Britt said.

“If this doesn’t pass, it won’t be long before services like Oxford Junction no longer have the manpower and resources to continue,” Smith said.