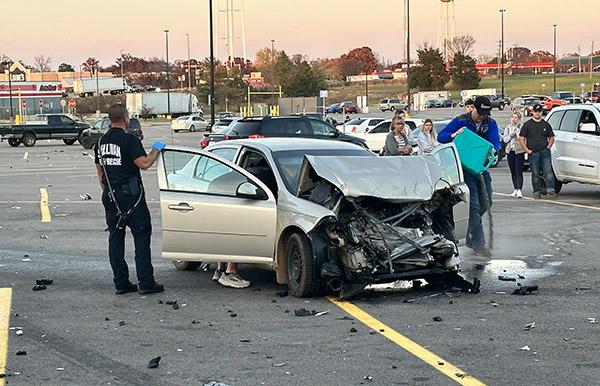 In a freak accident, a Sullivan man was arrested Monday, Oct. 31, by officers and handed over to the medical care of Missouri Baptist Ambulance personnel after the vehicle he was driving allegedly entered the Wal-Mart parking lot at the 350 Park Ridge Drive at high speed, hitting a vehicle and crossing the parking lot where he collided head-on with a second vehicle.

The vehicle was occupied by a teenage Sullivan.

The man’s vehicle jumped the curb and came to a stop a few meters from Aldi.

Police expect to file formal charges once the toxicology reports are referred to their department.

Medical personnel at the scene were able to transport the victim to Missouri Baptist Sullivan Hospital for treatment of minor to moderate injuries. He was also arrested at the scene by Sullivan police.

Surprisingly, the unidentified teenager Sullivan, who was just sitting in his car at the time of the impact, was uninjured at the scene.

What’s also amazing is that with the Halloween night traffic and the kids out, no one else in the parking lot was hurt in the crash.

Authorities working at the scene said it was a real miracle that no one was seriously injured or fatally injured when this incident happened.

The make and year of the vehicles and another report on the crash were not available at press time.

For video coverage of this incident, visit the Sullivan Independent News Facebook page.