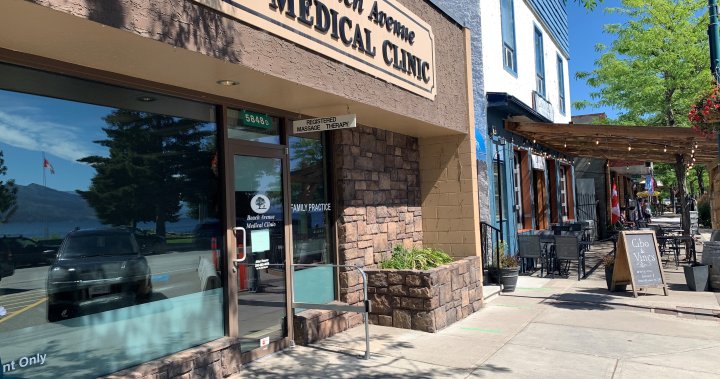 Medical clinic to finally reopen in Peachland, BC after three long years – Okanagan

It was March 2019 when the only medical clinic in Peachland, British Columbia closed, leaving the community of more than 5,000 without a doctor.

The closure of the clinic came after the retirement of the physician owner and director.

Since then, residents, many of whom are seniors, must travel 20 to 40 kilometers to see a doctor in nearby communities.

“I always felt safe that there was a medical clinic here if anything went wrong,” said Peachland resident Michele Thompson.

On Tuesday, however, news broke that the medical clinic will reopen in the fall.

“We have a great need for medical care here in our community. Citizens travel great distances to receive medical care, and I hope we can ease that burden,” said Sarah Kendrick, who will operate the clinic.

Kendrick and his partner Jubi Steinhauer are starting a business venture called Beachside Health Limited, which will be the company that will own and operate the clinic.

“We will do all the administration and take on the responsibility and the burden of running the business,” Kendrick told Global News.

2:50
Canadian emergency rooms in crisis as doctors and nurses are pushed to the brink

Canadian emergency rooms in crisis as doctors and nurses are pushed to the brink – July 17, 2022

The couple, who have a background in business, said they came forward because they saw a significant need for medical services.

“I grew up here. My partner also grew up in the Okanagan and we want to work locally and contribute to our community,” Kendrick said. “And we recognize that the need here was, you know, important for a medical clinic and so we thought maybe we could brainstorm together and see what we could do.”

Efforts to recruit a doctor to take over the clinic have been going on for years but without success.

“I haven’t really discussed it with the public because I hate giving them hopes, only to have their hopes dashed,” said Peachland Mayor Cindy Fortin. “But behind the scenes there was a lot of effort.”

A major challenge with recruitment efforts is that many physicians want to practice medicine and treat patients and not have to deal with the business side of running a clinic.

“They don’t want to carry the burden of running a business on top of practicing and treating their entire patient panel. It’s too much of a burden to bear,” Kendrick said. “So with us running the business and making it turnkey for doctors to come treat their patients and go home, hopefully we can attract doctors who are really looking for that work-life balance.”

The plan is to reopen the clinic in the fall.

Interior Health has already designated a nurse and nurse practitioner for the facility and work is actively underway to get doctors on site.

“We hope to encourage physicians who are already treating Peachlanders to come back to work in a team-based care environment and practice here one or two days a week and just treat their Peachlanders here where they live,” Kendrick said.

The mayor of Peachland says the past three years have been difficult for residents.

“It’s tough. It’s really tough, especially with our seniors or people with mobility issues, to travel to other communities to see their doctor,” Fortin said. “My doctor is all the way to Kelowna , so it’s very difficult.”

The soon to be opened clinic has 10 treatment rooms and the goal is also to bring in massage therapists, physiotherapists and other licensed specialists to create a medical center for a community that has lacked medical services for far too long.

“This is huge news for Peachland. It’s been very difficult to keep it a secret for the past few months and I really have to commend Sarah and the small group of her partners who are working on this,” Fortin said.

“They just did wonders and I’m so happy we can finally announce that.”