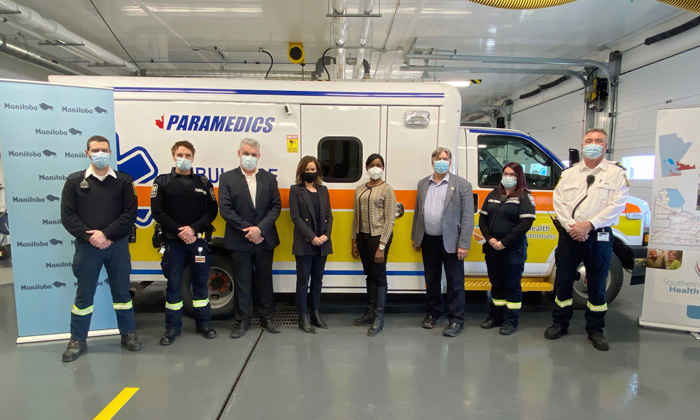 New $3.8 million Emergency Medical Services (EMS) positions opened in Crystal City and Portage la Prairie as part of Manitoba’s commitment to build a stronger service that meets the needs of residents of these communities and the greater Southern Health-Santé Sud region.

“These new stations support improved emergency care for patients and underscore an ongoing commitment to developing a more efficient and integrated emergency response system in the province,” said Health Minister Audrey Gordon. “This is a major upgrade to stations in rural Manitoba and demonstrates our commitment to building a more responsive, reliable and sustainable EMS system in Southern Health-Santé Sud and throughout Manitoba.

The new EMS stations will serve as operational hubs for paramedics, who are repositioned across the region using a flexible dispatch model that uses computer modeling and predictive deployment to ensure rapid emergency response in all areas. areas of the region, noted the minister.

“The new Crystal City station is an important investment for now and for the future sustainability of this essential service in this area,” said Alison Fijala, CEO of Rock Lake Health District. “We are so grateful to the province and Southern Health-Santé Sud for partnering to build this modern, well-equipped station that will benefit the retention and recruitment of EMS professionals and benefit so many people.

Portage la Prairie staff answered nearly 3,100 calls last year, making the station the fourth busiest in the province after Winnipeg. The new 5,834 square feet. The facility, which replaces a barracks located at a former fire station near Southport, was built on the same site as the Portage District General Hospital and includes a five-bay garage, offices, space for crew and a training and meeting area.

The station located in Crystal City measures 1,800 square feet and provides EMS personnel with a larger station that has ample office and staff spaces, as well as vehicle space that meets modern requirements for emergency service vehicles.

“We now have more modern facilities which provide more suitable space for staff, training and vehicles, which benefits staff and all those in the region who will be served by these stations,” said Scott Noble, director Regional EMS, Shared Health. “We are grateful for this investment which will improve services for the people of this region, especially at times when they need help the most.

The new EMS stations also build on the government’s commitment to invest in emergency services and implement recommendations made in Manitoba’s 2013 EMS System Review, including:

For more information on emergency medical services in Manitoba, visit gov.mb.ca and sharedhealthmb.ca.