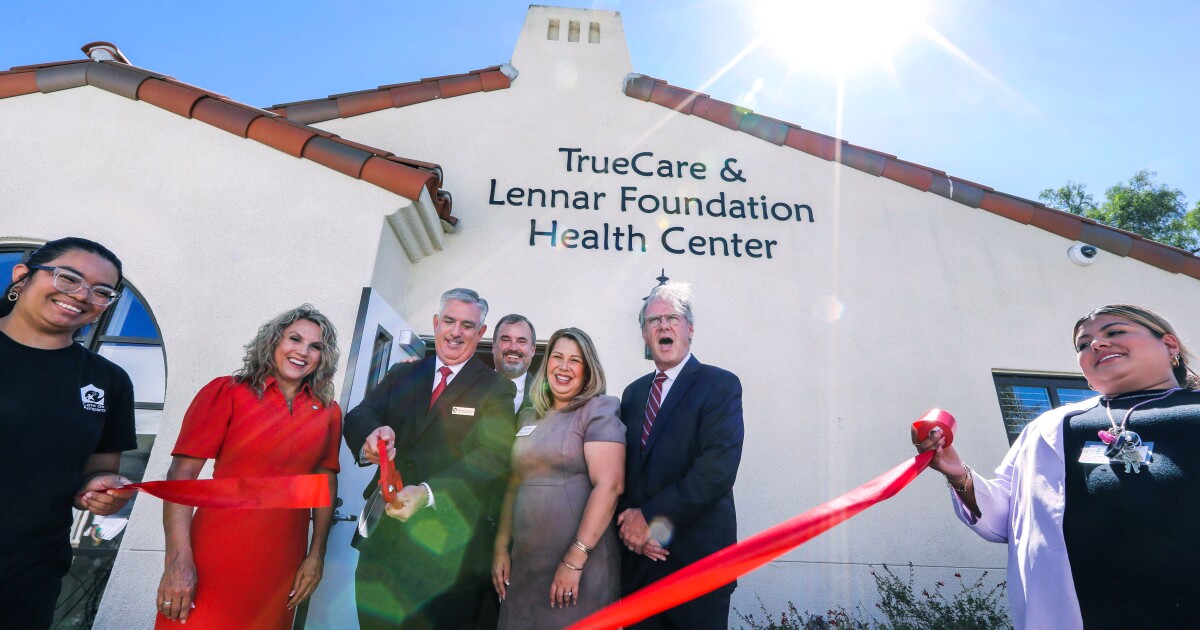 Girls and young women living at Casa de Amparo’s Casa Kids campus in San Marcos no longer need to travel to nearby towns for medical appointments. Now health care is only steps away from a cottage across the lawn.

The new TrueCare & Lennar Foundation Health Center will be staffed by a physician twice a month to provide medical services to association residents, ages 12 to 18, who live on campus after being removed from homes where they have been neglected or abused. Between 25 and 30 teenagers generally live on the site, where the average stay is between 6 and 24 months.

“This on-campus health center is just a game-changer for us,” Casa de Amparo CEO Mike Barnett said during a groundbreaking ceremony Thursday morning.

“These young women, they’ve never had reason to trust an adult in their lives, really,” he said, adding that young residents have likely experienced trauma in their lives and may be afraid. if they were told they were being taken to see a doctor in another city.

Now they just have to walk up the hill to a cabin where they will meet a pediatrician they have already visited, he said.

“Casa de Amparo stands for ‘House of Protection,’ and they know they are safe here and that the health care services they receive there are going to lead to better outcomes for everyone involved,” Barnett said. .

TrueCare operates 11 nonprofit community health clinics in North San Diego County and South Riverside County, serving 60,000 patients annually. Dr. Tina Fallon will be at the new Casa de Amparo clinic twice a month and is already seeing residents from the association’s San Marcos and Oceanside clinics. Fallon expects to see eight to 10 patients each day during her visits and said the new center will be especially convenient for residents who are mothers.

“They should pack up their kids and come with a guide, one of the employees who would drive them,” she said. “It’s a lot easier if you can just walk from your room to your doctor’s appointment.”

The 600 square foot clinic includes an exam room and laboratory for a variety of resident and infant health care services. Developer Lennar Corp. created the health center by converting a building that had been used for residents.

Ryan Green, president of Lennar’s San Diego division, said the partnership with Casa de Amparo began about three years ago when the developer chose the nonprofit as the beneficiary of its annual giving campaign.

“Throughout the campaign and during the delivery of gifts, many of our associates had the opportunity to learn more about the operation,” Green said. “They were so moved by Casa de Amparo’s mission and the people who take on challenges to achieve their goals, that they recommended that we dedicate more of our efforts and more of our resources to ensure their continued success.”

TrueCare President and CEO Michelle Gonzalez said staffing the Casa de Amparo Clinic is part of the nonprofit’s mission to provide health care for all.

“By making these primary care medical services available to these young women and their children, we are investing in each of them because we believe in the promise they hold for a better future,” she said. declared.

Gonzalez said TrueCare will open three more community health clinics and expand its fleet of mobile clinics by the end of the year.

San Marcos Mayor Rebecca Jones also spoke at the ceremony and said the collaboration involved in opening the new center shows that people can still put aside their differences during a time of division.

San Diego County Supervisor Jim Desmond, who served two years on the San Marcos City Council and served as the city’s mayor from 2006 to 2018, said the new clinic is the latest in several efforts to help youth and providing health care in North County.

“This valley of Twin Oaks is kind of a valley of healing,” he said.