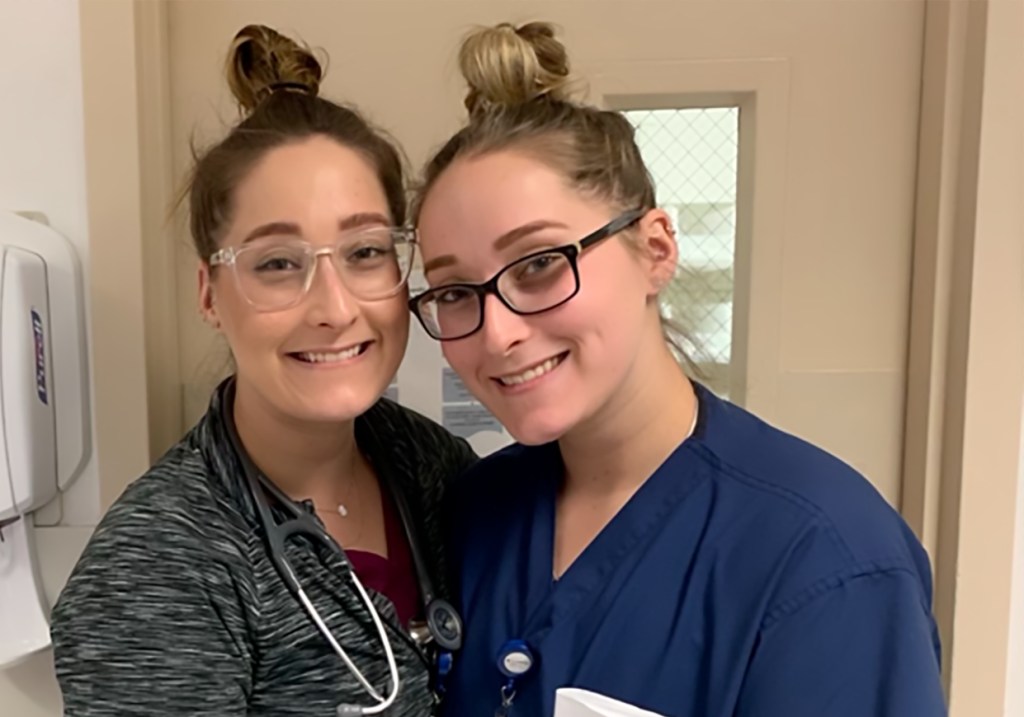 It’s the question in the patients’ eyes that the sisters notice first. The look that says, how can you not remember me? In the ER yesterday, you held my hand and told me everything would be fine, to hold on.

And now, the next day, you walk into my hospital room and look at me like a stranger, like we’ve never met? What’s wrong?

The short answer is that they hadn’t met. It was Amanda Singer in the ER, this is Lindsay Singer, her identical twin. They are both nurses at Providence Tarzana Medical Center – the daughters of a doctor and a pharmacist. The apple did not fall far from the tree.

“When we started, it was the staff who didn’t understand why I didn’t say hello to them when we walked down the hall,” Lindsay says. “They thought I was being rude or just having a bad day. It took them a while to realize that it was my sister they had met and that we were identical twins.

In middle school, the girls spent their weekends shadowing nurses at UCLA Medical Center while their father walked around. They fell in love with the job. It wasn’t 9 a.m. to 5 p.m., sitting at a desk. It was a constant action, stand up, and let’s go. Prove yourself. There are people who are suffering, go help them. STAT.

Al and Lori Singer had instilled a lot of Florence Nightingale in their daughters.

The girls had graduated from Pierce College’s nursing program when they were both accepted into the one-year TIP – transition to practice – program in Providence. It has always been difficult for newly graduated nurses to find work in acute care hospitals, and with the current nursing shortage, the program is a win-win for the hospital and the nurses.

They both earned their bachelor of science in nursing at Cal State Dominguez Hills while working at TIP — Lindsay in labor and delivery, and Amanda in the operating room — and had just settled into their new careers in 2020. when COVID-19 hit.

“I feel like it’s aged me 30 years,” Lindsay says today, with the confidence that only a 27-year-old who hasn’t had gray hair yet can muster.

Amanda had just been transferred from the recovery room to the emergency room, entering directly into a MASH unit. You made do with what you had on hand, and you were hoping help was on the way because at the start of this outbreak, everyone was flying blind.

“I was terrified,” she says. “I washed my hands in the hottest water possible. I was afraid of transmitting the coronavirus to my family. Lindsay and I haven’t seen them for about four months.

“COVID patients were thronging the ER, and I caught the virus at work before the vaccine was available. The hardest part was isolating myself from my sister to protect her. The two share an apartment not far from the hospital and work different shifts.

“My biggest fear, and it was partly naive, was that I would be fine if I got it, but I was so terrified at work that I would give it to an immunocompromised patient,” Lindsay says. She ended up catching it.

“We won’t see such an experience in our lifetime,” Amanda says. “It was fight or flight,” the ER nurses said. For two years, our adrenaline was skyrocketing every day, and that’s when you learn a lot about yourself.

You learn that this is the job you were supposed to have. You don’t want to be a doctor or work in hospital administration. You want to be a nurse, help deliver babies and help out in the emergency room if needed.

You enjoy walking into a hospital room and seeing that question in people’s eyes when you show up and smile. No, that wasn’t me in the ER yesterday. She was my twin sister.

Dennis McCarthy’s column airs Sunday. He can be reached at [email protected]