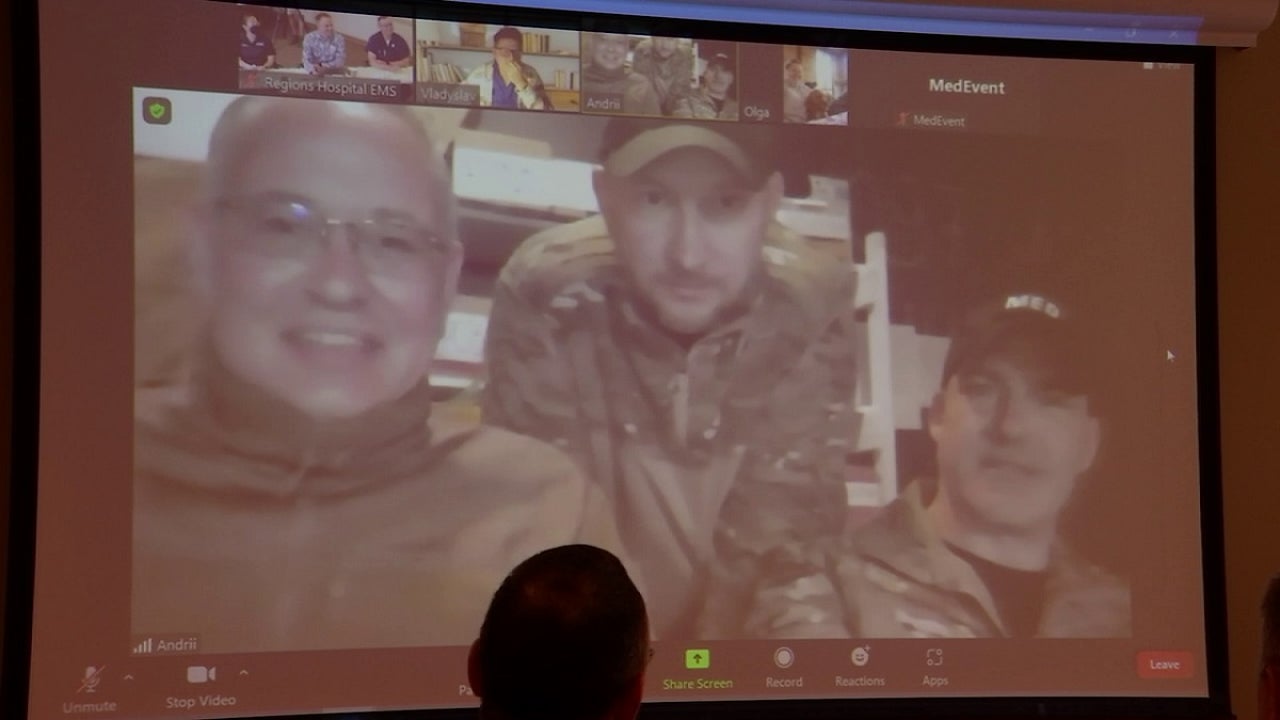 On the screen at the HealthPartners EMS training center were Ukrainian doctors. And on the other side of the planet, from a war zone, they were asking for help.

(FOX 9) – During the pandemic, we all got used to Zoom calls. But the one placed in Oakdale on Thursday was far from usual.

“What you just saw today are doctors talking to doctors and what we’re focusing on is patients… We’re not talking about politics,” said Dr. Aaron Burnett, deputy medical director Regional Emergencies and EMS Medical Director for the Saint-Paul Fire Department.

“We don’t talk about anything but sickness and pain because it’s universal,” Dr. Burnett told FOX 9. “Any doctor anywhere in the world knows what it looks like. “

On the screen at the HealthPartners EMS training center were Ukrainian doctors. And on the other side of the planet, from a war zone, they were asking for help.

“It’s hard to imagine what they’re going through right now,” said Dr. Kari Haley, also assistant director of emergency medical services in the regions. “And just knowing that they see us as experts and rely on us to help them is really just an honor.”

After the Russian invasion of Ukraine, St. Paul Fire Paramedic Sam Severtsgaard traveled there to help. Now, more than two months later, more of the country’s doctors are needed, and volunteers, to treat the wounded, not only the soldiers, but also many civilians.

But these doctors, whether family doctors, podiatrists or dentists, have no training in emergency medicine and those who can teach them in Ukraine are busy. Severtsgaard therefore reached out to his friends at HealthPartners and Regions for help.

“If you’re in the middle of a field and you have to save someone’s life, what are the things that are important, how can we do it with very minimal tools and that’s something as EMS doctors and training that we have a lot of expertise,” said Dr. Haley.

The first Zoom call was simply to determine the needs of Ukrainians. They decided that HealthPartners EMS doctors would make simple training videos that could be translated and shown to Ukrainian doctors. They will also continue routine live webinars.

They decided that all of the training would focus on what they called “the first 100 miles,” that is, getting people to the hospital. They also learned that there was a shortage of medical supplies, so any training should take this into account.

“Breathing tubes, chest tubes, blood products…everything I would think I would have access to in an emergency room and stabilization room, they only have their hands and stethoscope, and maybe they can start an IV,” said Dr. Bjorn Peterson, who is also assistant emergency medical director in the regions. “But we have to figure out how to adapt our trauma expertise here in an environment where we really don’t have all the gadgets and tools and things that we’re used to.”